I'll bet you thought I had dropped off the face of the earth.  Sorry to disappoint you, but I haven't.   I've just been too busy doing nothing.  I'm not kidding.  I can waste more time doing nothing and feeling like I'm so busy doing something.

I'm going to blame the Internet, Pinterest to be exact.  It's my latest obsession. I could be on that all day and night.

Besides, Pinterest, the other thing that takes a lot of my free time is our dog Cookie.  I have to take her on a walk every night.  I thought that the pounds would drop off once I started walking.  But no, I've actually gained 7 pounds.  What the heck?  I'm going to say it is muscle weight.

But while I was not blogging, life did go on.  Today I decided to share my niece Taylor's baby shower. 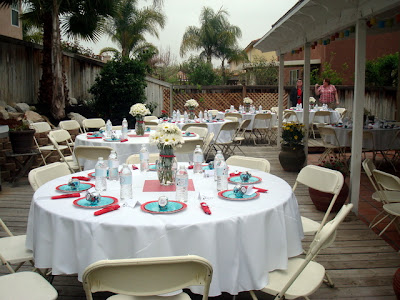 The shower was held at Eric and Jeannette's house (parents of Taylor).  It was suppose to be a beautiful day.  Except that Mother Nature didn't get the memo.  The day was actually probably one of the coldest of the entire winter season.  But it was no longer winter, it was actually spring.  But here in SoCal we only have 2 seasons, winter and summer.  It usually fluctuates between the two and they don't always happen in the correct season and/or order. 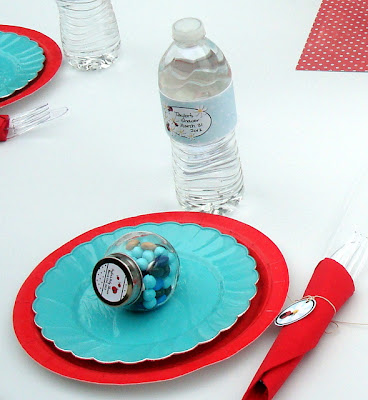 I love the color combo they chose.  And the theme was ladybugs. 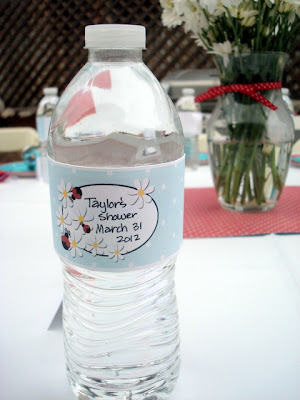 I love the labels on the water bottles. 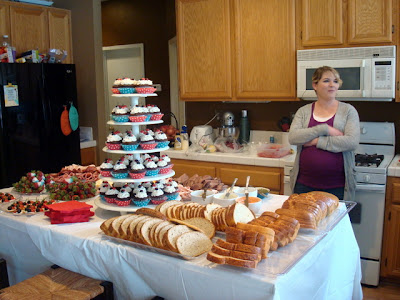 Here is Taylor patiently waiting for the food to be served.  OMG! (Oh my goodness for those of you that think I am taking the Lord's name in vain, which I am not).  The sandwiches were amazing.  All the bread came from Panera.  I had never eaten there before.  All I can say, it was the best bread I have ever had the privilege of tasting. 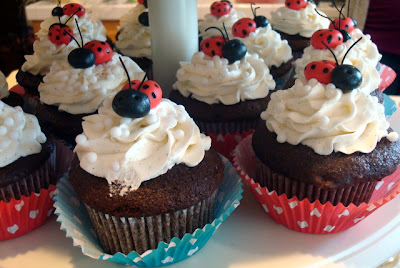 Aren't these the cutest cupcakes?  Love the little ladybugs.  And I just now noticed that the only closeup photo I took has a finger smudge in the frosting.  Looks like someone tried to sample before the party.  My guess it was one of the boys. 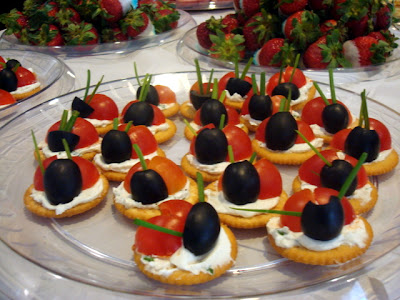 Danica put together these cute ladybug crackers.  I found a link to them on Pinterest (which for some reason I did not save).  They turned out so cute.  And they were pretty yummy as well.  Except for the olive part.  I hate olives.  But you need a head on the ladybug, so they were a necessary evil. 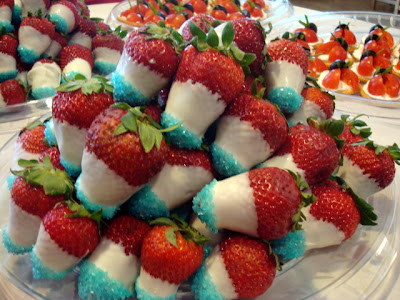 Taylor had found a link on Pinterest for these dipped strawberries and asked her mom to make them for the shower.  Jeannette tried and said it was an epic fail.   Luckily Danica was able to figure it out and saved the day.   These would be great for the 4th of July as well. 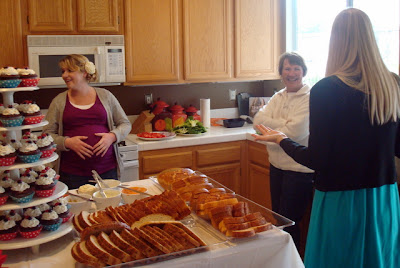 Taylor, Carol (Taylor's Grandma and Jeannette's Mom) and Andrea (back turned to camera) 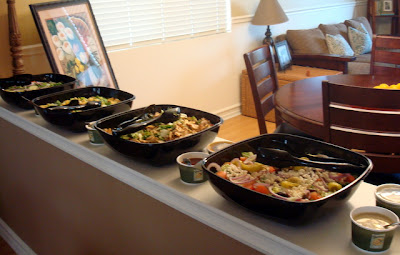 Jeannette also had these yummy salads from Panera as well.  I think I need to take a trip to Panera to get some more of their yummy food.  Panera could well be my next obsession. 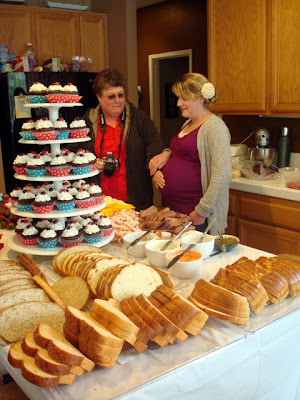 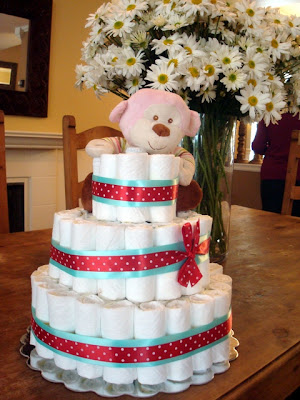 Since it was freezing outside, the gift opening took place inside.   Taylor got 2 diaper cakes.  I thought this one was cute.   Until....... 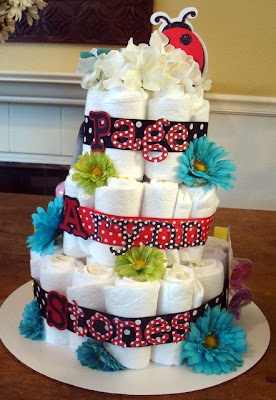 This one was brought in.  The other one was cute, but this one was WAY cute.  And it had baby Page's name on it. 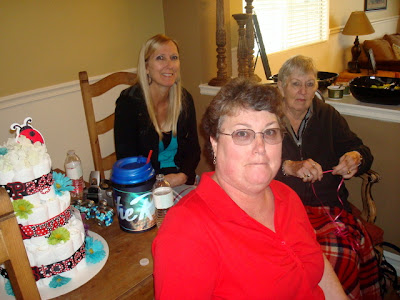 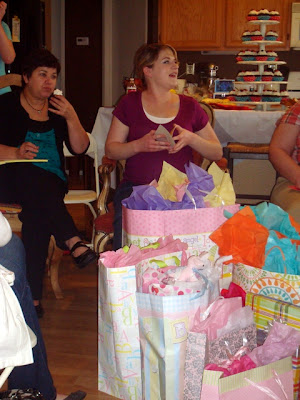 Taylor opening up her gifts.  Poor thing got so many gifts she was all tuckered out by the end. 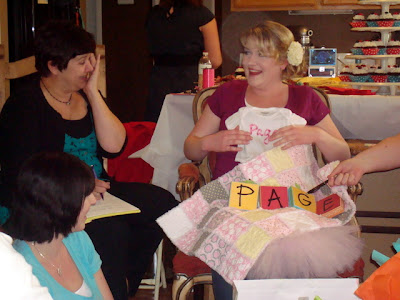 I didn't take a lot of photos during the gift opening process.  Jodi took tons of photos, and I was waiting for her to post them on Facebook so I could nab some.  But so far, she hasn't done so.   This quilt, personalized onesie, pink tutu and "PAGE" blocks were made from one of Taylor's friends Priscilla.  The "PAGE" blocks actually match the quilt that Taylor will be using in the crib that her Mother in Law made. 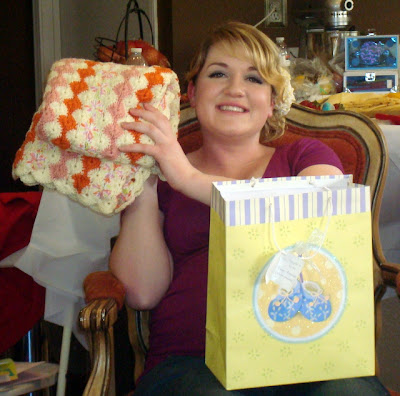 This afghan was made by the mother in law of my neighbor Roxanne. 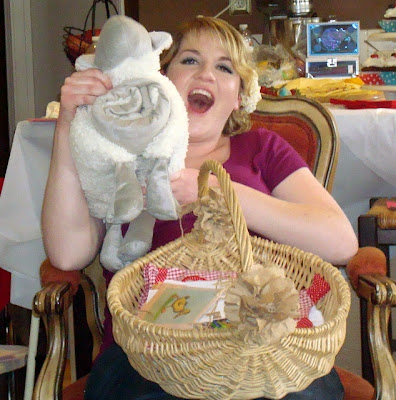 Here is Taylor opening up my gift.  I placed everything in this basket.  Taylor is using the basket to hold stuffed animals.  The lamb actually opens up to be a blanket. 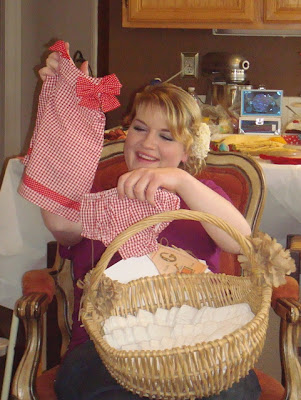 I wish I had taken a photo of the front of this cute summer dress.  It has a ladybug on it.  It fit the theme of her shower perfectly.  I also gave Taylor a bunch of diapers as well as a diaper holder and some wipes that i didn't get a photo of.

And I made this banner that spells "PAGE".  I forgot to take a photo of it at the party.  This was taken at Taylor and Michael's house in the nursery where it hangs on the wall.  I found all the vintage letter graphics from Rook No 17 blog.  Just used small clothespins from Walmart to hang each letter from some twine.  One of the easiest gifts to make.

And of course later that same day the sun finally came out and it was warm.  But being with friends and family to celebrate the upcoming birth of Page warmed the hearts of everyone there.

Tomorrow I will try and post about baby Page who was born on April 20, 2012.  She is definitely a cutie pie!  So stay tuned.  Yes, I am a proud Great Aunt.

Kim
Posted by Kim @ Starshine Chic at 5:43 PM No comments: 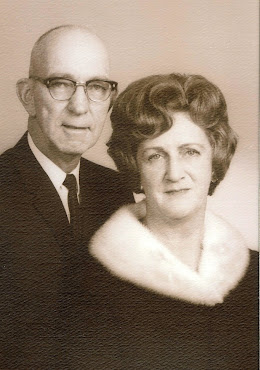 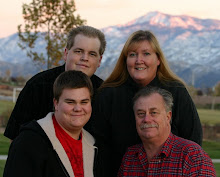